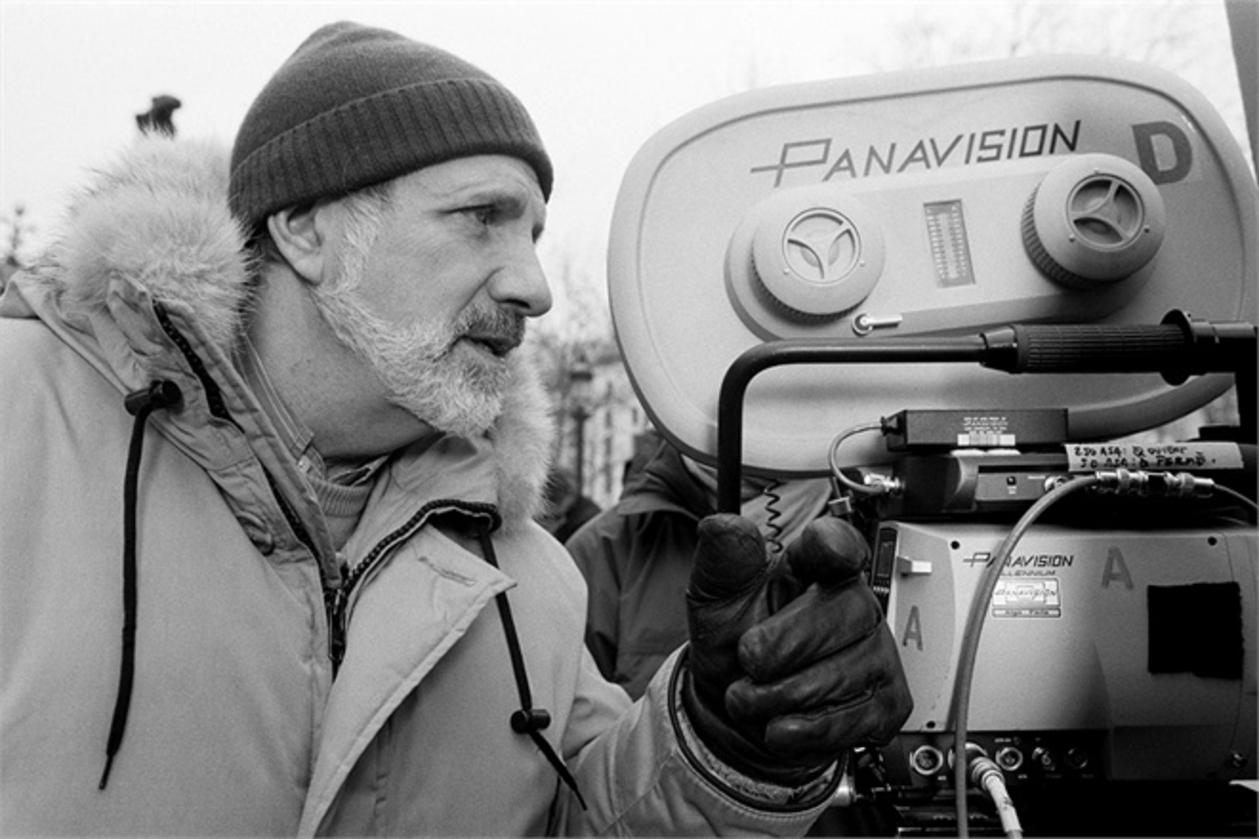 
Brian De Palma is the son of a surgeon. He studied physics but at the same time felt his dedication for the movies and made some short films. After seven independent productions he had his first success with Sisters (1972) and his voyeuristic style. Restlessly he worked on big projects with the script writers Paul Schrader, John Farris and Oliver Stone. He also filmed a novel of Stephen King: Carrie (1976). Another important film was The Untouchables (1987) with a script by David Mamet adapted from the TV series.


Brian De Palma is one of the well-known directors who spear-headed the new movement in Hollywood during the 1970s. He is known for his many films that go from violent pictures, to Hitchcock-like thrillers.

Born on the 11th of September in 1940, De Palma was born in New Jersey in an American-Italian family. Originally entering university as a physics student, de Palma became attracted to films after seeing such classics as Citizen Kane (1941). Enrolling in Sarah Lawrence College, he found lasting influences from such varied teachers as Alfred Hitchcock and Andy Warhol.

At first, his films comprised of such black-and-white films as Bridge That Gap (1965). He then discovered a young actor whose fame would influence Hollywood forever. In 1968, de Palma made the comedic film Greetings (1968) starring Robert de Niro in his first ever credited film role. The two followed up immediately with the film The Wedding Party (1969) and Hi, Mom! (1970).

After making such small-budget thrillers such as Sisters (1972) and Obsession (1976), De Palma was offered the chance to direct a film based on the Stephen King novel "Carrie". The story deals with a tormented teenage girl who finds she has the power of telekinesis. The film starred Sissy Spacek, Piper Laurie and John Travolta, and was for De Palma, a chance to try out the split screen technique for which he would later become famous.

Carrie (1976) was a massive success, and earned the two lead females (Laurie and Spacek) Oscar nominations. The film was praised by most critics, and De Palma's reputation was now permanently secured. He followed up this success with the horror film The Fury (1978), the comedic Home Movies (1979) (both these films featured Kirk Douglas, the crime film Dressed to Kill (1980), and another crime thriller entitled Blow Out (1981) starring John Travolta.

His next major success was the controversial, ultra-violent film Scarface (1983). Written by Oliver Stone and starring Al Pacino, the film concerned Cuban immigrant Tony Montana's rise to power in the United States through the drug trade. The film, while being a critical failure, was a major success commercially.

Moving on from Scarface (1983), De Palma made two more movies before landing another one of his now-classics: The Untouchables (1987), starring old friend 'Robert de Niro' in the role of Chicago gangster Al Capone. Also starring in the film were Kevin Costner as the man who commits himself to bring Capone down, and Sean Connery, an old policeman who helps Costner's character to form a group known as the Untouchables. The film was one of de Palma's most successful films, earning Connery an Oscar, and gave Ennio Morricone a nomination for Best Score.

After The Untouchables (1987), De Palma made the Vietnam film Casualties of War (1989) starring Michael J. Fox and Sean Penn. The film focuses on a new soldier who is helpless to stop his dominating sergeant from kidnapping a Vietnamese girl with the help of the coerced members of the platoon. The film did reasonably well at the box office, but it was his next film that truly displayed the way he could make a hit and a disaster within a short time. The Bonfire of the Vanities (1990) starred a number of well-known actors such as Bruce Willis and Morgan Freeman, yet it was still a commercial flop and earned him two Razzie nominations.

But the roller coaster success that De Palma had gotten so far did not let him down. He made the horror film Raising Cain (1992), and the criminal drama Carlito's Way (1993) starring Al Pacino and Sean Penn. The latter film is about a former criminal just released from prison that is trying to avoid his past and move on. It was in the year 1996 that brought one of his most well-known movies. This was the suspense-filled Mission: Impossible (1996) starring Tom Cruise and Jon Voight.

Following up this film was the interesting but unsuccessful film Snake Eyes (1998) starring Nicolas Cage as a detective who finds himself in the middle of a murder scene at a boxing ring. De Palma continued on with the visually astounding but equally unsuccessful film Mission to Mars (2000) which earned him another Razzie nomination. He met failure again with the crime/thriller Femme Fatale (2002) the murder conspiracy The Black Dahlia (2006) and the controversial film Redacted (2007) which deals with individual stories from the war in Iraq.

Brian De Palma may be down for the moment, but if his box office history has taught us anything, it is that he always returns with a major success that is remembered for years and years afterwards.

Won top prize in regional Science Fair in high school. Project was "An Analog Computer to Solve Differential Equations." Cf. computer nerd in Dressed to Kill (1980).
De Palma graduated from Friends' Central School, a small quaker school outside of Philadelphia
De Palma bases his most famous cinematic predilection, voyeurism, on a specific childhood incident. When he was a child, his parents split up, his mother accusing his father of infidelity. The young De Palma spent several days stalking his dad with recording equipment, hoping to find evidence to confirm his mother's suspicions.
Uncle of actor Cameron De Palma.
In the 1970s, De Palma helped a close friend on a film project. He helped audition and interview actors. When the film was shot, DePalma did some uncredited writing on an opening "scrawl," a device the friend thought of at the last minute to help explain events in the film, so the audience would not be confused. The friend was George Lucas and the film was Star Wars: Episode IV - A New Hope (1977).
First child with Gale Anne Hurd, Lolita, born September 19, 1991.
Second daughter, Piper De Palma, born October 21 1996 in Palo Alto, California.
Younger brother of photographer Bart DePalma.
Italian-American.
Is a huge fan of Bruce Springsteen and directed him in the music video "Dancing in the Dark".
Wrote the role of the call girl in Dressed to Kill (1980) specifically with his then wife Nancy Allen in mind.
Has never contributed an audio commentary track to his DVDs.
Ex-stepfather of The O.C. (2003) actress Willa Holland and Brianna Holland.
Received a special thanks credit in Mean Streets (1973) for introducing Martin Scorsese and Robert De Niro to one another.
His three favorite films are Lawrence of Arabia (1962), The Red Shoes (1948) and Vertigo (1958).
Revealed in an interview with French TV that a dream project since he started making movies has been an adaptation of the Alfred Bester novel "The Demolished Man". He said it's still a dream project because of its incalculable cost to produce.
Has directed 3 actors to Oscar nominations: Sissy Spacek (Best Actress, Carrie (1976)), Piper Laurie (Best Supporting Actress, Carrie (1976)), and Sean Connery (Best Supporting Actor, The Untouchables (1987)). Connery won an Oscar for his performance.
In Bulgaria, looking for locations for his current project - The Black Dahlia (2006). [November 2004]
Holds the dubious distinction of being the director with the most nominations for Worst Director at the Razzie Awards. He was nominated for Dressed to Kill (1980), Scarface (1983), Body Double (1984), The Bonfire of the Vanities (1990) and Mission to Mars (2000), but failed to win for any of these films.
Two of Brian De Palma's films, Sisters (1973) and Blow Out (1981), are in the Criterion Collection.
Has said that Scarface (1983) and Body Double (1984) are the two films of his that have been attacked the most. Dressed to Kill (1980) also received a lot of negative attention as well.
Is a democrat.
Brian De Palma is the godfather of Steven Spielberg and Amy Irving's son Max.
Though it's already known he assisted George Lucas several times while Lucas was making Star Wars: Episode IV - A New Hope (1977), he was a little skeptic and critical about the final product, after seeing for the first time, quoting "What is this crap about the force?". Source: Easy Riders, Raging Bulls: How the Sex, Drugs and Rock 'N' Roll Generation Saved Hollywood (2003).
Two of Brian De Palma's films are based on television shows: The Untouchables (1987) and Mission Impossible (1996).
Brian De Palma was one of film critic Pauline Kael's favorite directors, and she was also a fan of many of his films.