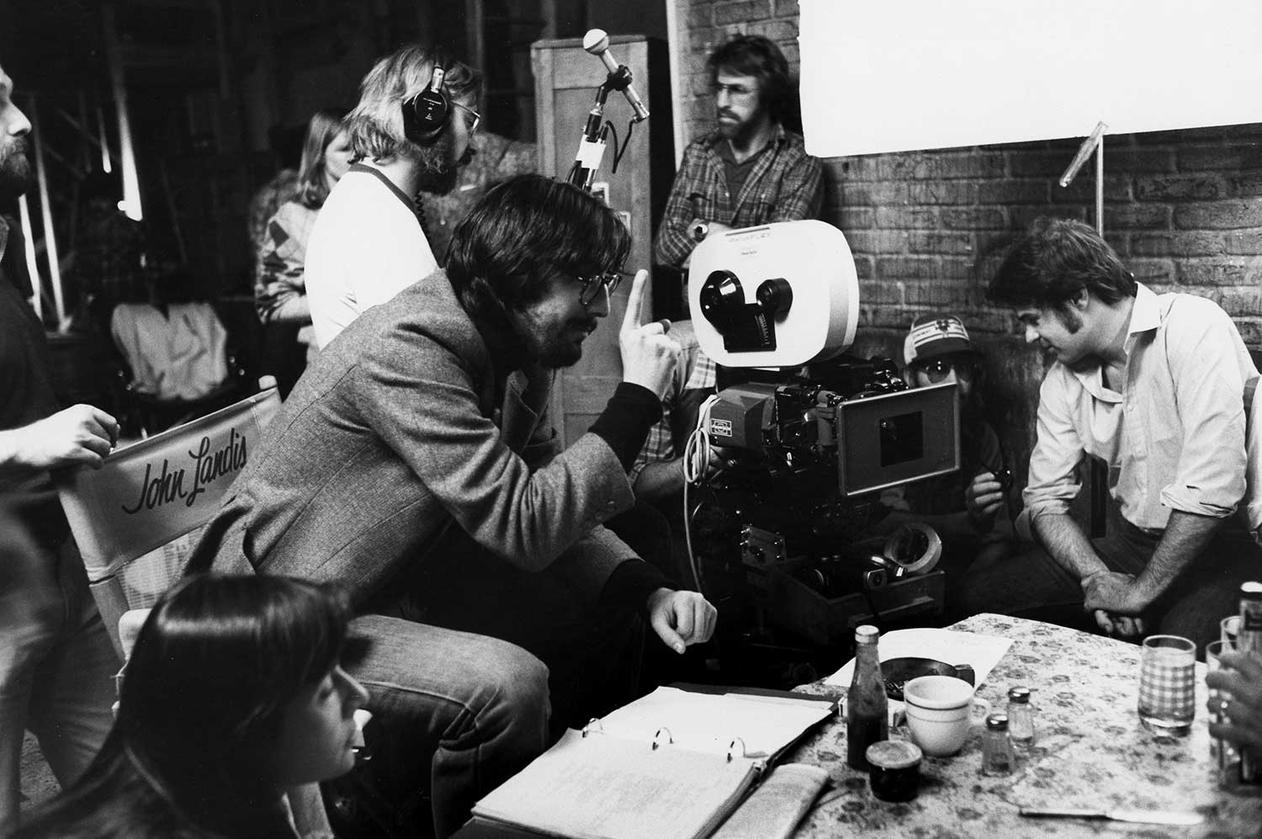 
John Landis began his career in the mail room of 20th Century-Fox. A high-school dropout, 18-year-old Landis made his way to Yugoslavia to work as a production assistant on Kelly's Heroes (1970). Remaining in Europe, Landis found work as an actor, extra and stuntman in many of the Spanish/Italian "spaghetti" westerns. Returning to the US, he made his feature debut as a writer-director at age 21 with Schlock (1973), an affectionate tribute to monster movies. Clad in a Rick Baker-designed gorilla suit, Landis starred as "Schlockthropus", the missing link. After working as a writer, actor and production assistant, Landis made his second film, The Kentucky Fried Movie (1977), in collaboration with the Zucker brothers and Jim Abrahams. Landis rose to international recognition as director of the wildly successful Animal House (1978). With blockbusters such as The Blues Brothers (1980), Trading Places (1983), Spies Like Us (1985), ¡Three Amigos! (1986) and Coming to America (1988), Landis has directed some of the most popular film comedies of all time. Other feature credits include Into the Night (1985), Innocent Blood (1992) and the comedy/horror genre classic An American Werewolf in London (1981), which he also wrote. In 1986 Landis and four others, were acquitted of responsibility for the tragic accident that occurred in Landis' segment of Twilight Zone: The Movie (1983) in which actor Vic Morrow and two child actors were killed. The film also included segments directed by Joe Dante, George Miller and Steven Spielberg. In 1983 Landis wrote and directed the groundbreaking music video of Michael Jackson's Michael Jackson: Thriller (1983), created originally to play as a theatrical short. "Thriller" forever changed MTV and the concept of music videos, garnering multiple accolades including the MTV Video Music Awards for Best Overall Video, Viewer's Choice, and the Video Vanguard Award - The Greatest Video in the History of the World. In 1991 "Thriller" was inducted into the MVPA's Hall of Fame. In 1991, Landis collaborated again with Jackson (I) on Michael Jackson: Black or White (1991), which premiered simultaneously in 27 countries with an estimated audience of 500 million. Although it was not the first motion picture or music video to do so, "Black or White" popularized the use of "digital morphing", where one object appears to seamlessly metamorphoses into another; the project raised the standard for state-of-the-art special effects in music videos. Landis has also been active in television as the executive producer (and often director) of the Ace- and Emmy Award-winning HBO series Dream On (1990). Other TV shows produced by his company, St. Clare Entertainment (St. Clare is the patron saint of television), include Weird Science (1994), Sliders (1995), Honey, I Shrunk the Kids: The TV Show (1997), Campus Cops (1995) and The Lost World (1998). In 2004 the Independent Film Channel broadcast his feature-length documentary about a used-car salesman, Slasher (2004). Deer Woman, an original one-hour episode written by Landis and his son Max Landis, inaugurated the Masters of Horror (2005) series in the fall of 2005 on Showtime. "Masters of Horror" also features one-hour episodes by John Carpenter, Roger Corman, Tobe Hooper, Don Coscarelli, Mick Garris, Dario Argento and Larry Cohen.

A sought-after commercial director, Landis has worked for a variety of companies including Direct TV, Taco Bell, Coca Cola, Pepsi, Kellogg's and Disney. He was made a Chevalier dans l'ordre des Arts et des Lettres by the French government in 1985, awarded the Federico Fellini Prize by Rimini Cinema Festival in Italy and was named a George Eastman Scholar by The Eastman House in Rochester, New York. Both the Edinburgh Film Festival and the Torino Film Festival have held career retrospectives of his films. In 2004 Landis received the Time Machine Career Achievement Award at the Sitges Film Festival in Spain. Sent as a filmmaker/scholar by the Academy of Motion Pictures Arts & Sciences, Landis has lectured at many film schools and universities including Yale, Harvard, NYU, UCLA, UCSB, USC, Texas A&M, The North Carolina School of the Arts, University of Miami and Indiana University. He has also acted as a teacher and advisor to aspiring filmmakers at the Sundance Institute in Utah. Additionally, he edited Best American Movie Writing 2001 (Thunder's Mouth Press, NY, 2001). Born in Chicago, Illinois, Landis moved to Los Angeles soon after his birth. He is married to Deborah Nadoolman, an Oscar-nominated costume designer, and President of the Costume Designers Guild, with whom he has two children.

The phrase "See You Next Wednesday". Supposedly, the phrase is the title of a film that Landis had an idea for at the age of 15. The title is a direct reference to a line in 2001: A Space Odyssey (1968). He describes the film as the kind of movie that a 15 year old adolescent boy would have made. He sometimes uses ideas from this movie, and when he does he puts the phrase in as a "homage". It is not in all of his movies [SYNW].
Airport scenes in Into the Night (1985) and Coming to America (1988) have a call over the PA system for a 'Mr Frank Ozkerwitz' to pick up the white courtesy phone. This is Frank Oz's real name. Landis' work frequently features Oz.
Music: 'The Girl from Ipanema'
Frequently casts other directors and filmmakers in small roles
Often casts Stephen Bishop as "Charming Guy" in his films, basically a bit part for a friend.
Often has an image of large gorilla, usually King Kong, somewhere in a movie.
Features clips of cast members in the ending credits when their name appears
He often has his characters look into camera lens to make eye contact with the audience or "break frame".
Frequently works with Dan Aykroyd
Films usually contain a scene where a full song is sung (see: Animal House (1978), The Blues Brothers (1980), Coming to America (1988), Blues Brothers 2000 (1998)).
Often works with makeup artist Rick Baker ((Schlock (1973), An American Werewolf in London (1981), Coming to America (1988), Michael Jackson: Thriller (1983))
On YouTube's Trailers from Hell channel, always introduces himself with a joke name, while his actual name appears at the foot of the screen ("Hi, I'm First Lady Michelle Obama, and this is Trailers from Hell").

The trademark trivia often mentioned in Landis-directed films, the inclusion in some form of the phrase "See you next Wednesday", is a reference to a script young Landis wrote at 15 (which in itself was named after a line in the Stanley Kubrick film 2001: A Space Odyssey (1968)). Whenever Landis uses an idea from it in a film he's made, he always "credits" the script. The reference appears during the werewolf rampage as the title on the marquee of a porno theater in An American Werewolf in London (1981). It is spoken in German when Vic Morrow is being shot at on the building in the sequence he directed for Twilight Zone: The Movie (1983). In The Blues Brothers (1980) it's on a billboard where the the cops are lying in wait. Then again, it mostly appears as the name on movie posters, so that it probably became merely something to watch for like Alfred Hitchcock's cameos. It first appeared in his first film Schlock (1973) as the name of a movie and as a movie poster in a theater lobby. It appeared again in his second film. The Kentucky Fried Movie (1977), as the title of the "Feel-O-Rama" movie. It surfaces in an apartment in Trading Places (1983) on a movie poster. In Coming to America (1988) it appears in a subway station (the movie claims to star Jamie Lee Curtis, who appeared in "Trading Places"). Another poster is visible in Ophelia's apartment. In Spies Like Us (1985) it appears on the recruitment poster behind the desk of the commander of the army training post. In Into the Night (1985) it appears on two posters in the office where Ed and Diana make the phone call. In Innocent Blood (1992) it is once again advertised on a movie marquee across the street from the Melody Lounge exotic dance bar near where a car crash takes place. It also appears in the Michael Jackson video Michael Jackson: Thriller (1983), which was directed by Landis. One of the men chasing the werewolf finds a note and reads this out while the shot shows MJ in the theater eating popcorn.
In his early career he worked as a stunt-man specialising in horse-falls.
He directed the music videos Michael Jackson: Thriller (1983) and Michael Jackson: Black or White (1991), both by Michael Jackson. He has a small cameo as the director in "Black Or White".
Father of Max Landis and Rachel Landis.
After he dropped out of school at age 17 he worked as mailman at the Fox studios.
Went to school with Eliza Roberts.
Biography in: John Wakeman, editor. "World Film Directors, Volume Two, 1945-1985". Pages 555-559. New York: The H.W. Wilson Company, 1988.
Has never shot a film in the 2.35:1 aspect ratio until 2010's Burke and Hare (2010).
Once worked as an attendant in a parking lot.
One of his favorite movies is The Discreet Charm of the Bourgeoisie (1972). He admits that this film inspired the use of the dream within a dream gag in An American Werewolf in London (1981).
Member of the jury at the Venice Film Festival in 1989.
Close friend, George Lucas, offered John Landis the role of director on Howard the Duck (1986). After reading the script Landis turned down the opportunity due to the police car crashes in the finale. He felt this was too similar to that of his previous film The Blues Brothers (1980).
Five of his movies were nominated for AFI's 100 Years...100 Laughs: The Kentucky Fried Movie (1977), Animal House (1978), The Blues Brothers (1980), An American Werewolf in London (1981) and Trading Places (1983). "Animal House" made the list at #36.
On 12 April 2011, when he was introducing his new film Burke and Hare (2010) at The Brussels International Fantastic Film Festival (BIFFF), he was knighted. He is now a "Knight of the Order of the Raven". It's one of the festival's highest honors given only to masters of the genre.
Says the scariest horror film for him is a "toss-up between" Tobe Hooper's The Texas Chain Saw Massacre (1974) and William Friedkin's The Exorcist (1973). [NYTimes, 8/21/11].
During the filming of The Blues Brothers (1980) John Belushi's drug use was at its height. On a day of filming Belushi didn't want to come out of his trailer. John Landis, who was fed up with Belushi and his antics, reportedly forced his way in to Belushi's trailer, grabbed all of Belushi's drug stash and flushed them down the toilet. Landis told him he wasn't going to be putting up this anymore.
The Ruling Class (1972) is one of his favorite movies.
Had an allergic reaction to shrimp on the set of Thriller.