Mr. Les Garland serves as a Co-Founder and Chief Programming Officer at QYOUTV, Inc. Mr. Garland is the Founder of The Tube Music Network, Inc. and has been its Chief Executive Officer since March 2006. Mr. Garland has been Senior Executive Vice President of The Tube Media Corp. since April 2004. He has been Chief Operating Officer of Tube Music Network Inc., a subsidiary of AGU Entertainment Corp. since 2003. Mr. Garland’s success as a business executive has long been fueled by his love for music. Beginning his career as a radio and television personality, he went on to become one of the most influential radio programmers of the 70's, exerting even more influence on the 80's as co-founder/originator of both MTV: Music Television and VH-1. As MTV Network's senior executive vice president, Mr. Garland served as executive producer of the first six “MTV Video Music Award Shows” and the historic Live Aid Concert in 1985. He served as President of Tube Music Network, Inc. from August 2003 to March 2006. Mr. Garland served as President of Afterplay Marketing, Inc., a Nevada company since 1995. Following their years together at MTV, Mr. Garland Co-founded Quantum Media, launching a music company and television properties such as, “The Morton Downey Jr. Show” and “Streets”, television’s first reality cop show. Mr. Garland executive produced the home video release of the classic bout between Marvin Hagler and Sugar Ray Leonard and produced a Pepsi Cola radio campaign in conjunction with BBDO in the early 90’s, enlisting acts such as Naughty by Nature, Luscious Jackson, Notorious B.I.G., PM Dawn, Digable Planets and The Rembrants to record the Pepsi Generation jingle. From 1990-1997, Mr. Garland played an essential role in the domestic and international launch of the interactive music channel, The Box, acting as senior executive vice president. Responsible for entertainment programming, promotion, ad sales and marketing, Mr. Garland oversaw the rollout of the channel from a base of 200,000 homes at its inception to more than 30 million U.S. households and 25 million households internationally. From there he went on to found sputnik7.com with Chris Blackwell, serving as sputnik7’s president. He has been a Director of The Tube Media Corp. since April 1, 2004. During the prime years of contemporary music radio Mr. Garland programmed WRKO/Boston, K-100/Los Angeles and CKLW/Detroit, the Motor City’s legendary Big 8, which could be heard in 38 U.S. states. Discovered by pop radio legends Bill Drake and Paul Drew, Mr. Garland’s career in radio led to recognition as one of America’s top radio programming executives. He was named one of Rolling Stone magazine’s, “Music Industry Heavy 100” and was an integral catalyst in the merging of radio’s freeform FM sound with contemporary music formats, leading to consecutive Radio Station of the Year and Programmer of the Year awards at RKO Radio’s KFRC San Francisco. Dubbed, “Close Encounters of the Third Kind,” noisy offices and stores became silent when the late voiceover artist Paul Frees declared that 610 on the dial could be used as a channel for communication with extraterrestrials. In June 2003, Mr. Garland was invited to speak at the Electronic Arts worldwide marketing conference before 300 company executives from 48 states. Additionally, Mr. Garland is a founding member of both the Rock and Roll Hall of Fame and The Academy of Digital Music Arts and Sciences. Profiles of Mr. Garland have appeared in numerous publications including Vanity Fair, Time, GQ, People, USA Today, The New York Times, Newsweek and Forbes. Mr. Garland launched and co-managed Bad Boy/Arista pop act Dream, taking the group to double-platinum sales success and securing various endorsement deals for companies including DKNY, AOL and Twix. He also signed actor Sylvester Stallone to BBDO/HBO for Clio-award winning television creative and consulted for Hill & Knowlton/Samcor, delivering Carson Daly as celebrity endorser for the 30th birthday campaign of Mr. Coffee. He continues to perform a consulting role for Grammy Award-winning songwriter and Survivor founder, Jim Peterik, well-known for writing, “Eye of the Tiger”, and “High on You” other top-ten songs. AfterPlay recently acquired the rights to represent the theatrical, television, and home video release of the film, ‘Tribute,’ a rock-umentary executive produced by Steven Soderbergh that was recently featured in Rolling Stone and is being shown on the pay television channel, Showtime.

Les Garland is an American Entertainment Executive who currently leads mass media entertainment as the Founder and CEO of his company, AfterPlay Entertainment, a boutique, multi-disciplinary consulting practice that, in part, matches world famous talent with world-class brands. Garland was an executive or co-founder of networks including MTV: Music Television, VH1, The Box Television Network and College Television Networks.

In his early days in Radio, Garland was discovered by radio giants Bill Drake and Paul Drew. From there he became the Program Director of four major market radio stations including K-100 Los Angeles, CKLW Detroit, WRKO Boston, and KFRC San Francisco, all during contemporary music’s prime.

In San Francisco, KFRC took the place as the top rated radio station in Northern California and was named Radio Station of the Year. Channeling Orson Welles, Garland created a KFRC promotional spot that has since become a part of radio history and also receiving a Clio for it. The promo, titled 'Close Encounters', stunned listeners by announcing that the station would go silent in order to communicate with extraterrestrials. Garland was named Program director of the year.

After Atlantic Records, Garland moved back to the east coast becoming the programming head of MTV: Music Television, the world’s first 24-hour music channel. While at MTV, Garland set celebrity profiles for ad guru Dale Pon's anthemic I Want My MTV marketing campaign. Along with Founder, Robert Pittman, serving as MTV Networks Senior Executive Vice President, Garland was executive producer of the first six MTV Video Music Awards and oversaw all elements of programming. He was on the lead team that globalized the MTV brand with distribution into Europe, Asia and Australia. During his time at MTV he was asked to be the DJ voice embedded in the classic hit We Built This City by Starship. This impromptu stunt immortalized his voice as the things DJ dreams are made of, while Garland calls it his first number one song.

Today, music and screens (television, etc.) remain Garland's passion. One new project includes his work on the Virgin-launched EDM cross-platform, culture series Travelectric, hosted by Shiva, the creator and face of the show that will feature the world’s top DJs. In the broadcast realm, he continues his work with Charles Koppelman while teaming up with famed entrepreneur Michael Cohl developing two new properties. In the fall of 2014, Garland launched a new television programming service, called The QYou, as co-founder of The QYou, Garland has teamed up with former Senior Vice President, Executive Producer of FOX News Corporation, Scott Ehrlich and longtime friend, award-winning music video producer, and former President of Lionsgate Digital, Curt Marvis.

In his early radio days, Garland was titled Program Director of the Year while at KFRC. He also received a Clio for his creation of the Promo "Close Encounters." Garlands radio career also granted him a place on Rolling Stone magazine’s list of the "Music Industry Heavy 100."  In the 90's while Garland served as Sputnik7.com President, the channel won multiple awards, including a Webby for digital innovation.[citation needed] His accomplishments were acknowledged at the September 27, 2014 38th Annual Mid-America Emmy Awards  where he received the Governor’s Award for Lifetime Achievements. This EMMY was presented to Garland by longtime friend and Eagle, Glenn Frey. Stated so eloquently in Frey's presentation speech, Frey proclaimed "He is a true pioneer, and a living legend in our business. Like the song says, to know him is to love him." 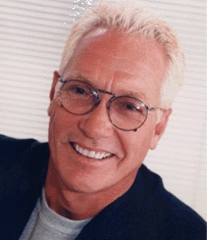