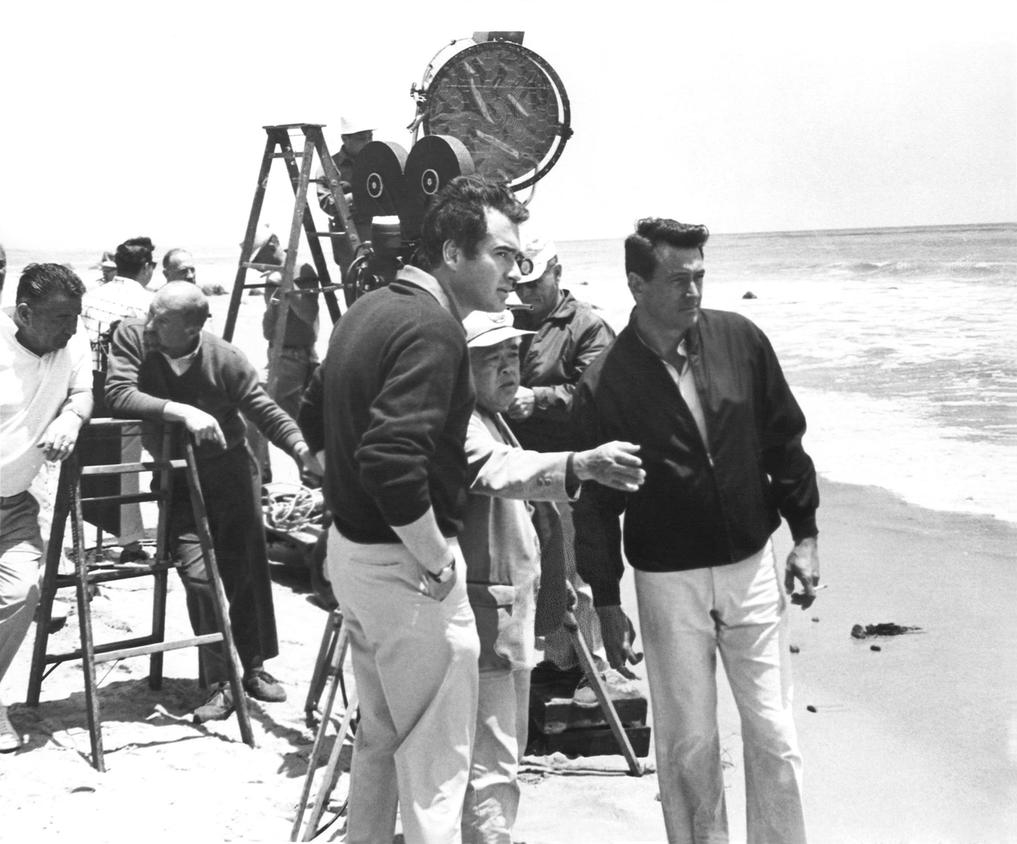 
Born in New York and raised in Queens, John Frankenheimer wanted to become a professional tennis player. He loved movies and his favorite actor was Robert Mitchum. He decided he wanted to be an actor but then he applied for and was accepted in the Motion Picture Squadron of the Air Force where he realized his natural talent to handle a camera. After his military discharge he began a TV career in 1953 convincing CBS to hire him as an assistant director, which consisted mainly working as a cameraman at that time. He eventually started to direct the show he was working on as an assistant director. Frankenheimer still didn't want to direct films. He liked to direct live television, and he would have continued to do it if the profession itself hadn't cease to exist. He first turned to the big screen with The Young Stranger (1957) which he hated to do because he thought he didn't understand movies and wasn't used to work with only one camera. Disappointed his with first feature film experience he returned to his successful television career directing a total of 152 live television shows between 1954 and 1960. He took another chance to move to the cinema industry, working with Burt Lancaster in The Young Savages (1961) ending up becoming a successful filmmaker best known by expressing on films his views on important social and philosophical topics.


When Sen. Robert F. Kennedy was shot at the Ambassador Hotel in Los Angeles on June 5, 1968, it was his good friend Frankenheimer who had personally driven him there that day.
Children: daughters Elise and Kristi Frankenheimer. Kristi, a location manager of 20+ years, worked with her father on several projects, including his last, Path to War (2002), for HBO.
Was fluent in French.
Served in the U. S. Air Force.
Was approached by Albert R. Broccoli to screen-test for the role of James Bond in Dr. No (1962) (Frankenheimer began his career as an actor).
Inducted into the Television Hall of Fame in 2002.
Biography in: John Wakeman, editor. "World Film Directors, Volume Two, 1945-1985." Pages 365-372. New York: The H.W. Wilson Company, 1988.
As a director on the You Are There (1953) TV series, he was supervised by fellow director Sidney Lumet.
Directed the television debuts of Sir John Gielgud and Ingrid Bergman in "The Browning Version" episode for The DuPont Show of the Month (1957) and Startime: The Turn of the Screw (1959), respectively.
Directed 140 live television dramas for Studio One in Hollywood (1948), Playhouse 90 (1956), The DuPont Show of the Month (1957) and other showcase anthologies.
Famous for his use of innovative camera angles, Frankenheimer was acclaimed for a shot in The Manchurian Candidate (1962) that is slightly out of focus. He said that the shot was an accident.
When Burt Lancaster walked onto the set the first day of shooting of The Young Savages (1961), he was startled and dismayed to see the camera on the floor, aiming upward. Lancaster had never before worked with a director who used such innovative camera angles. He grew to trust Frankenhiemer, and they made four more films together.
The camera work of most directors in "The Golden Age" of TV drama was static, reflecting most TV directors' backgrounds in the theater, and they typically used blocking more appropriate for a stage production. Frankenhiemer was one of the first TV directors to use multiple camera angles, a moving camera, quick editing and close-ups.
Directed "For Whom The Bell Tolls" for Playhouse 90 (1956), one of the first showcase dramas to be presented in two parts and on tape. The production, which cost $400,000, was the most expensive TV show at that time (1959).
One of his biggest dreams when he started directing was to work with a concert orchestra. He eventually did it twice, in Prophecy (1979) and The Holcroft Covenant (1985).
Had been working on directing Exorcist: The Beginning (2004) at the time of his death.
Grandson Dylan.
Directed six actors in Oscar-nominated performances: Burt Lancaster, Telly Savalas, Thelma Ritter, Angela Lansbury, Edmond O'Brien, and Alan Bates.
Was originally set to direct Breakfast at Tiffany's (1961) with Marilyn Monroe in the leading role.
Owned a 1988 supercharged Mercedes-Benz 560 SEL, which was willed to the Petersen Automotive Museum in Los Angeles upon his death. It can occasionally be seen at the museum on display.
Was attached to direct Men of War (1994) starring Dolph Lundgren, originally written by John Sayles as "A Safe Place". Dropped out to make a somewhat ecologically similarly themed, The Burning Season: The Chico Mendes Story (1994).
Frankenheimer was initially set to direct Breakfast at Tiffany's (1961), but was taken off the film because star Audrey Hepburn had never heard of him. Ironically that gave him the opportunity to do The Manchurian Candidate (1962).
According to Frankenheimer he and Burt Lancaster did not get along doing The Young Savages (1961). In a 1983 interview the director remarked, "We disliked each other intensely. There was no way I was ever going to work with him again." Lancaster changed his mind after seeing the film, and when the actor acquired the rights to "Birdman of Alcatraz" and learned that Frankenheimer wanted to do it, they formed a personal and professional partnership and ended up doing five films together, among them Birdman of Alcatraz (1962).
He was married three times. His first wife was called Joanne Evans and they were briefly married while both were college students--chiefly, he claimed, because in the 1940s it was easier than living together. He claimed that neither of them remotely expected the marriage to last long, and it didn't.
Although often thought of as an actor's director, he had a very abrasive working relationship with Sir Dirk Bogarde on The Fixer (1968). Since then, Bogarde always referred to him as "Frankenstein".
'Burt Lancaster' (aqv) personally chose him to replace 'Arthur Penn' as director of The Train (1964) when Lancaster did not approve of Penn's vision of the film--he wanted a more action-oriented film that would appeal to a wider audience, while Penn envisioned it as being more about the paintings that drove the film's plot.
Steve Martin's long-time girlfriend in the 1970s, Mitzi Trumbo, left him for Frankenheimer. A number of years later, Frankenheimer tried unsuccessfully to seduce Martin's wife at the time, Victoria Tennant, according to Martin's autobiography.
Named the State Fair (1945) as his favorite film when polled by the AFI's "Private Screenings.".
Won three consecutive Emmy's in the Outstanding Directing for a Miniseries or a Special category, for the films Against the Wall (1994) - competing with many 1993 projects, The Burning Season: The Chico Mendes Story (1994) and Andersonville (1996).