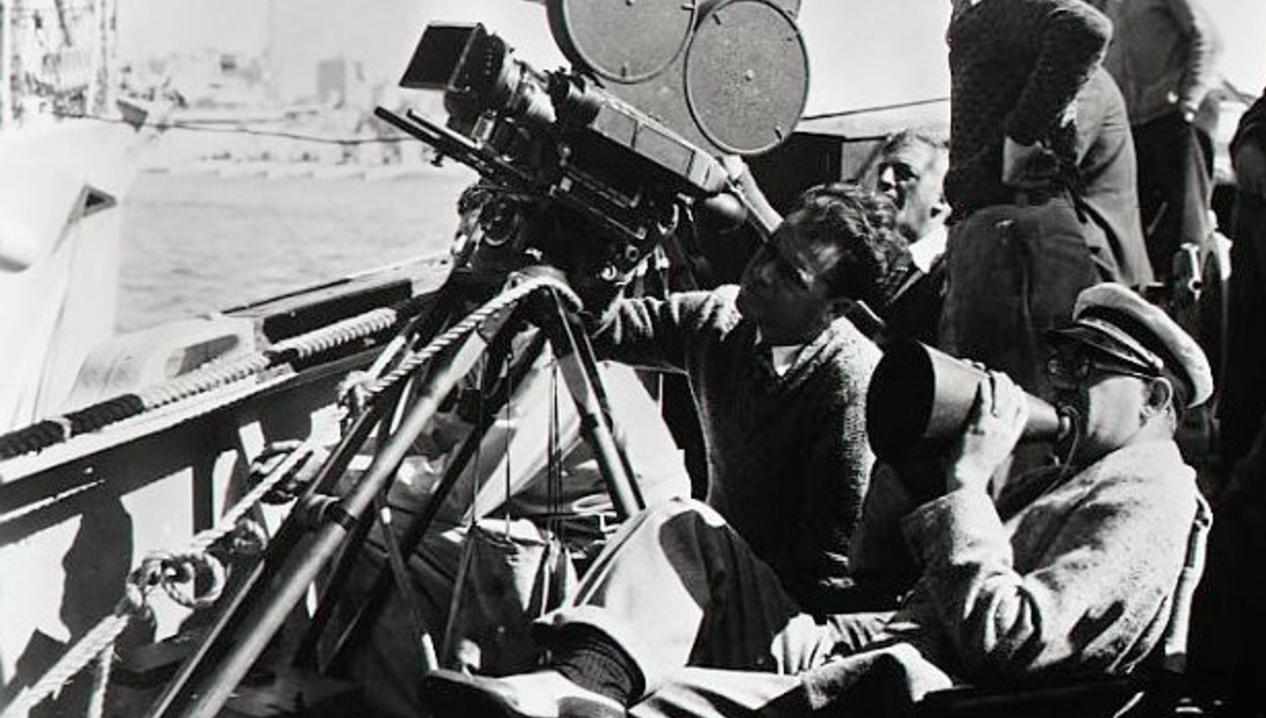 
John Ford came to Hollywood following one of his brothers, an actor. Asked what brought him to Hollywood, he replied "The train". He became one of the most respected directors in the business, in spite of being known for his westerns, which were not considered "serious" film. He won six Oscars, counting (he always did) the two that he won for his WWII documentary work. He had one wife; a son and daughter; and a grandson, Dan Ford who wrote a biography on his famous grandfather.


John Ford is, arguably, The Great American Director. When Orson Welles, who repeatedly screened Ford's Stagecoach (1939) as a crash course in filmmaking before helming his first film, Citizen Kane (1941), was asked who his three favorite directors were, he answered, "John Ford, John Ford, and John Ford." Along with D.W. Griffith and Cecil B. DeMille, the first-generation pioneers who created the narrative film in America, if not the world, Ford -- who came of age when movie production began shifting from its New York-New Jersey base to California in the second decade of the 20th Century -- ranks with William Wyler, Frank Capra and Howard Hawks as not only being among the greatest of American directors, but as an artist who helped define what America was on the silver screen. Ford's cinematic art is as much a part of Americana as a Frederic Remington painting of the Old West, a subject both lovingly portrayed in their respective media. (Ford was said to have possessed a painterly gift as a filmmaker.) Such was the respect he was held by his peers in the industry, he won four Academy Awards as Best Director, a record that still stands.

The legend known as John Ford was born John Martin Feeney on February 1, 1894 (many sources say 1895 and that is the date that is chiseled into his tombstone) in Cape Elizabeth, Maine, which is just south of Portland, the northeastern seaport where his parents had settled. His parents were Irish immigrants who arrived in the United States in 1872. They had 11 children in all, six of whom lived to adulthood. John was their tenth child, born between a girl and a boy who both died as infants. A saloon-keeper and an alderman, the Feeney family pater familias was a stereotypical Irish American, dabbling in both booze and politics in Portland, where John attended high school.

John Feeney followed his older brother Frank, who had renamed himself Francis Ford, to Hollywood. Frank, who was 13 years John's senior, had started out as a movie actor in 1909 and eventually appeared in about 500 films. He also established himself as a movie director, helming almost 200 films beginning in 1912, when he shot Western shorts for Thomas H. Ince at Bison Motion Pictures. Renaming himself Jack Ford, John Feeney acted in 15 of his brother's pictures from 1914 through 1916. He also appeared as a member of the Ku Klux Klan in D.W. Griffith's 1915 blockbuster The Birth of a Nation (1915), the American cinema's first certifiable blockbuster, a movie as controversial during the Woodrow Wilson administration as it is now. (The film was banned in Boston to forestall the possibility of its inciting racial violence.) He directed himself as the leading man in a Western.

Young Jack Ford began to exit his brother's orbit and establish himself on his own when he moved from Bison to Universal as a director. It was directing films from behind the camera instead of acting in them before the camera that he made his reputation, starting in the late teens, helming Westerns starring Harry Carey, one of the superstars of silent screen horse operas.

In 1923, Jack Ford renamed himself John Ford and was one year away from his first masterpiece, The Iron Horse (1924), a Western. It was while working for production chief Darryl F. Zanuck at 20th Century Fox in the 1930s, and over at R.K.O. (where the married Ford romanced a young Katharine Hepburn, herself the winner of a record four Oscars in her category, Best Actress), that he began to create the body of work that established his greatness. At Fox, Ford worked with the studio's two superstars, Shirley Temple and Will Rogers, the #1 and #2 draws at the box office. He won three Academy Awards as Best Director while toiling at R.K.O. and Fox, his first for R.K.O.'s The Informer (1935), which also won an Academy Award nomination as Best Picture and garnered a Best Actor Oscar for long-time Ford collaborator Victor McLaglen.

Winner of the Best Picture Award from the National Board of Review and the New York Film Critics Circle (which also named Ford Best Director), "The Informer" was once considered, before the Citizen Kane cult was firmly established by 1960, a leading contender as the best American film ever made. The film's prestige diminished rapidly after the '60s, because the reputation of the film depended on the memory of aging film critics and movie-goers who typically had not seen the film in years. Films like The Power and the Glory (1933), the Preston Sturges-written epic known to have been a major influence on "Citizen Kane," but which was "lost" for decades (a complete print was not found until half-a-century after the film was released) had higher reputations than they deserved, as it had been a longtime since they had been viewed.

In the 1960s, film appreciation societies began to bloom, and many old classics and regular programmers alike were unspooled again on the silver screen, many in 16-mm non-theatrical prints. This movement, centered around college campuses and film archives in major cities, gave rise to the Humphrey Bogart cult and confirmed Citizen Kane (1941)'s reputation as a supreme masterpiece of cinema. When the videotape revolution of the late 1970s made old movies more readily available, the reputation of some old masterpieces faded while other forgotten films, like William Wyler's 1936 adaptation of Sinclair Lewis' Dodsworth (1936) and nearly forgotten actors like Walter Huston were rediscovered, and their reputations waxed anew. "The Informer" was not one of those old films that aged well, and a contemporary cineaste would consider absurd the idea of it being the greatest American film of all time, as it had been by many for a generation after it first won four Oscars. Interestingly, John Ford's reputation has not suffered in the ensuing years of the videotape revolution, which brought his work to the modern audience unmediated by commercial television, which mercilessly cut up movies to conform to an advertising schedule, thus ruining them aesthetically. Increased exposure to Ford's oeuvre has burnished his reputation, and he still ranks supreme among American directors.

Now known to posterity primarily for his Westerns, Ford at Fox was a master of many genres, and even directed comedies such as Will Rogers Steamboat Round the Bend (1935), though unlike his contemporary Howard Hawks, he never really displayed a deft handling of that genre. Ford helmed contemporary dramas, in the same vein as William Wyler, and historical epics, like Warner Bros.' Michael Curtiz, but strangely, he stayed away from the Western, except for an occasional foray into an oater like Stagecoach (1939). "Stagecoach" is a classic that created the cliché of the drunken doctor in an action film, a role that brought Thomas Mitchell the 1940 Best Supporting Actor Oscar, not Mitchell's turn as Scarlett O'Hara's father in Gone with the Wind (1939), the biggest blockbuster of all time, which was released the same year as "Stagecoach."

In the 1940s, Ford won-back-to-back Best Director Oscars for two more classics he made at Fox, the screen adaptations of future Nobel laureate John Steinbeck's Pulitzer Prize-winning classic The Grapes of Wrath (1940) in 1941, and of Richard Llewellyn's memoir of his youth in the coal-mining region of Wales, How Green Was My Valley (1941) in 1942. "The Grapes of Wrath" is a far better contender for the appellation "Greatest American Movie Ever" than is the dated "The Informer," while "How Green Was My Valley" has suffered unfairly due to the slings and arrows and assorted brickbats thrown at it by the "Citizen Kane" cult (which it beat out at the Academy Awards for Best Picture and Best Cinematography, in addition to Best Director), but a classic it is, beautifully shot, acted and directed.

He had sat out the First World War, the War to End All Wars, but in the 1930s, John Ford had joined the U.S. Naval Reserve as the country once again moved towards participation in a European war that seemed inevitable with the rise of Hitler in Germany. When the U.S. entered World War II after the Japanese attack on Pearl Harbor, Ford went on active duty and headed a documentary film unit. For his Navy documentaries, he won back-to-back Academy Awards for The Battle of Midway (1942) in 1943 and for December 7th: The Movie (1943) in 1944. Thus, from 1941 through 1944, John Ford won an Oscar each year for directing two feature films and two documentaries, a feat which was -- and remains -- unprecedented. (In 1953, John Ford won his record fourth Best Director Oscar for his paean to the Ireland of parents, The Quiet Man (1952). It also is a feat that remains unequaled.)

In the mid-1940s, after working in many genres, Ford began to focus on Westerns again, beginning with My Darling Clementine (1946), one of the classics of the genre. Many of his Westerns featured John Wayne, whom he had first worked with on Stagecoach (1939) and who became a superstar in Howard Hawks' classic oater Red River (1948). Wayne appeared in Fort Apache (1948), She Wore a Yellow Ribbon (1949), and Rio Grande (1950), the famous "Cavalry Trilogy." Along with "My Darling Clementine," Ford was plumbing the nature of American myth-making, and the creation of history as an historical narrative, that is, the re-creation of history, after the fact, i.e., history as something man-made, thus fallible. He had found the perfect correlative for Hollywood myth-making. This strain of John Ford's canon would reach its apotheosis a dozen years later, with The Man Who Shot Liberty Valance (1962), which took on these issues with a literalness that caused many contemporary critics to dismiss the film.

John Ford created so many classic Westerns that he began to be associated with the genre. It's interesting to note that from 1950 through 1959, he made only one Western, the classic The Searchers (1956), one of the greatest examples of the genre. Starting with The Horse Soldiers (1959) which he made for the Mirisch Co. at the end of the decade, six of his last eight completed movies were Westerns, including his last masterpiece, "The Man Who Shot Liberty Valance."

As befitted his status as America's premier director, in 1973, John Ford was the recipient of the first Lifetime Achievement Award of the American Film Institute. President Richard Nixon attended the event, presenting Ford with the Presidential Medal of Freedom, the highest civilian award in the U.S.

Regardless of where his westerns were set, filming exteriors at Monument Valley, Arizona/Utah, USA.
Funeral goers in his movies usually sing the hymn "Shall We Gather at the River."
If a doomed character plays poker, the last hand he plays before going to his death will be the "death hand" (two aces, one of them the ace of spades, and two 8s; so-called because Wild Bill Hickok held this hand when he was murdered). The hand will be shown in close-up.
Frequently cast John Wayne, Henry Fonda, Maureen O'Hara, Ward Bond, and James Stewart.
Rarely used camera movements in his films, reserving them only for very specific moments. Also avoided close-ups as much as possible.
Westerns and war movies
His characters are often morally grey individuals trying to survive a harsh world
Rarely shot a scene with more than two takes