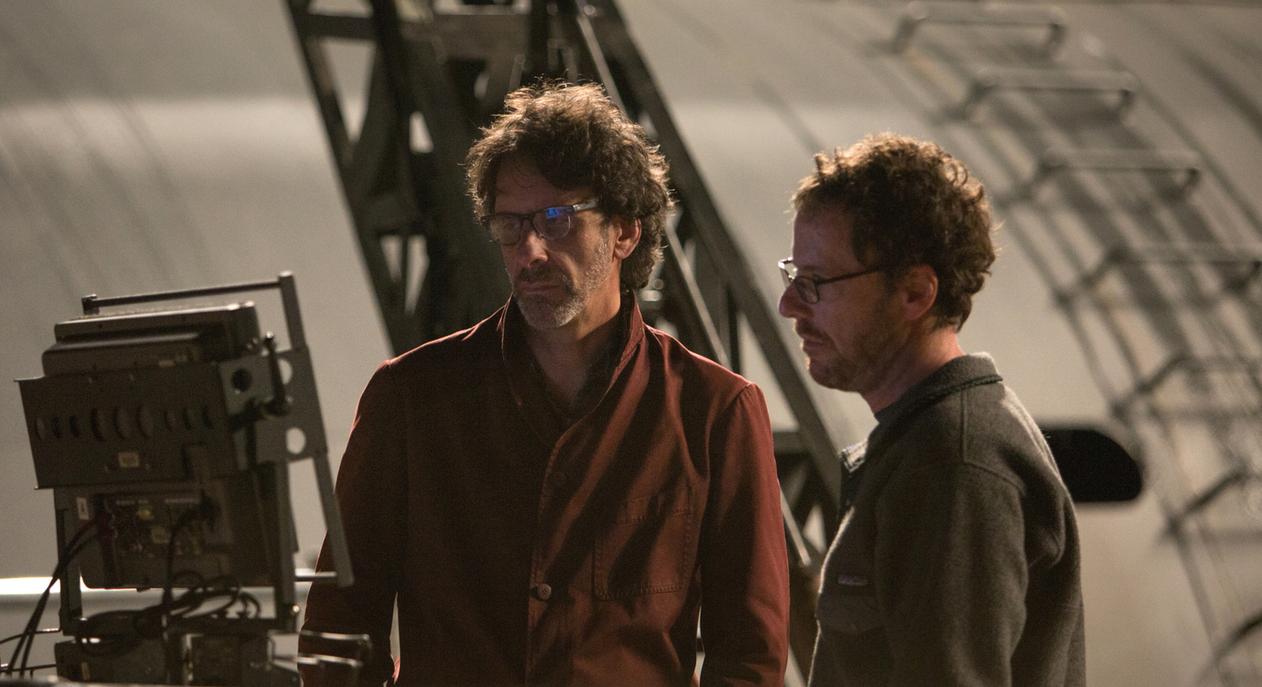 Frequently casts Steve Buscemi (6 times), Frances McDormand (5 times), Jon Polito (5 times), John Goodman (4 times), John Turturro (4 times), George Clooney (3 times), Michael Badalucco (3 times), Charles Durning (twice), M. Emmet Walsh (twice), Peter Stormare (twice), Richard Jenkins (twice), John Mahoney (twice), Tony Shalhoub (twice), Stephen Root (twice), and Billy Bob Thornton (twice).
References to the films of Stanley Kubrick
Films often center around or include a botched crime
Often creates at least one lengthy sequence in most of his films where only music plays as a major event unfolds, i.e Raising Arizona (1987) when Nicolas Cage is being chased after robbing a store. Also sequences in Miller's Crossing (1990), The Big Lebowski (1998), The Man Who Wasn't There (2001), and Fargo (1996).
The Coens frequently focus on round spinning objects: hat in Miller's Crossing (1990), bowling balls and tumble-weed in The Big Lebowski (1998), hair pomade tins in O Brother, Where Art Thou? (2000), UFO and a car wheel in The Man Who Wasn't There (2001) ...or the fans in Blood Simple. (1984).
Often has a certain phrase that is repeated throughout the movie or a specific scene.
Typically makes movies set during a specific time period, often in the near-past (Fargo (1996) takes place in 1987, The Big Lebowski (1998) in 1991, and No Country for Old Men (2007) in 1980).
Films usually contain at least one fast-talking character
Films often include characters or places with the stereotypes of the regions they take place in. The Mid-Western accents and snow-covered landscapes for Fargo (1996), the South-Eastern accents and barren deserts of Arizona for Raising Arizona (1987), the Southern accents and dust-bowl landscape for O Brother, Where Art Thou? (2000), Los Angeles accents and life-style in The Big Lebowski (1998), and the accents and cramped environments of Los Angeles in Barton Fink (1991).
His films often feature a big male character who talks loudly or yells at the camera. E.g. John Goodman in The Big Lebowski (1998), Raising Arizona (1987), Barton Fink (1991) and O Brother, Where Art Thou? (2000).
A tense situation in a moving car. E.g. Fargo (1996), The Big Lebowski (1998), _Burn After reading (2008)_ and Blood Simple. (1984).


Brother of Joel Coen.
Graduated from Princeton University, where he once tried to explain a missed deadline by saying that he had lost one of his arms during a hunting accident.
Works so closely with his brother Joel Coen that the two of them have been jokingly referred to as "The Two-Headed Director".
Alumnus of Simon's Rock College, Great Barrington, MA, with brother Joel Coen. This is a fully-accredited college for students who typically enter at age 16 - before graduating high school.
Ranked #88 in Premiere's 2003 annual Power 100 List with brother Joel Coen. They had been ranked #92 in 2002.
Brother-in-law of Frances McDormand.
He and brother Joel Coen have had final cut on all of their films since Blood Simple. (1984), their debut film.
Frequently includes kidnapping plots in his films.
Has used the character name of Marva Munson in both of his past two films. First, in Intolerable Cruelty (2003) (Judge Marva Munson) and secondly, in The Ladykillers (2004) (Marva Munson).
Worked as a statistical clerk at Macy's before setting off to make Blood Simple. (1984).
He (along with his brother Joel Coen) is part of the prestigious group of individuals to have won Oscars for writing, directing and producing in the same year, for the film No Country for Old Men (2007). The others are Peter Jackson for The Lord of the Rings: The Return of the King (2003), 'James L Brooks' for Terms of Endearment (1983), Francis Ford Coppola for The Godfather: Part II (1974), Billy Wilder for The Apartment (1960) and Leo McCarey for Going My Way (1944), and Alejandro González Iñárritu for Birdman or (The Unexpected Virtue of Ignorance) (2014). James Cameron also won three Oscars for Titanic (1997) but they were for directing, producing and editing.
Only three times in Academy Award history have director-collaborators been nominated for Best Directing Oscars: Robert Wise and Jerome Robbins for West Side Story (1961), Warren Beatty and Buck Henry for Heaven Can Wait (1978) and Joel Coen and Ethan Coen for No Country for Old Men (2007). (Wise/Robbins and the Coens actually won the award).
The first Coen brothers film where both he and brother Joel Coen are given directing and producing credits was The Ladykillers (2004). They have shared these duties on all of their films, but Joel has always been listed as director and Ethan as producer.
Has a younger sister named Deborah, who is a psychiatrist.
Was briefly married to a woman named Hillary in 1985. Has two children, a son Buster Jacob Coen and a daughter Dusty, with current wife Tricia Cooke.
His mother, Rena Neumann Coen, died of kidney disease in 2001.
Along with his brother Joel, has directed six actors in Oscar-nominated performances: Michael Lerner, Frances McDormand, William H. Macy, Javier Bardem, Jeff Bridges, and Hailee Steinfeld. McDormand and Bardem each won Oscars for performances in their separate movies.
The Coen Brothers are noted for their unusual writing process of not only eschewing outlines, but of not even concerning themselves what their story is about or who their characters are before beginning to write their screenplays. They will simply begin writing any scene they think up that they find to be interesting. Then, if they think of an interesting idea for a following scene, they will write that one, and then another, and so on and so forth until they have a first draft, discovering what the story is along the way. Then, they will heavily revise what they have until they feel they have a shootable screenplay. They have noted that because of this, they will often get writer's block around the mid-point of any given screenplay, and will begin another screenplay in the meantime in order to remain productive. For example, the entirety of Barton Fink (1991) was written while they were battling writer's block with Miller's Crossing (1990), and the first 40 pages of The Big Lebowski (1998) was written while they were stuck with Barton Fink (1991).
As of 2014, he and Joel Coen wrote four films that were nominated for the Best Picture Oscar: Fargo (1996), No Country for Old Men (2007), A Serious Man (2009) and True Grit (2010). Of those, only No Country for Old Men (2007) is a winner in the category.
Both he and his brother Joel are huge fans of Stanley Kubrick.