Undoubtedly one of the most influential film personalities in the history of film, Steven Spielberg is perhaps Hollywood's best known director and one of the wealthiest filmmakers in the world. Spielberg has countless big-grossing, critically acclaimed credits to his name, as producer, director and writer.

Steven Allan Spielberg was born in 1946 in Cincinnati, Ohio, to Leah Frances (Posner), a concert pianist and restaurateur, and Arnold Spielberg, an electrical engineer who worked in computer development. His parents were both born to Russian Jewish immigrant families. Steven spent his younger years in Haddon Township, New Jersey, Phoenix, Arizona, and later Saratoga, California. He went to California State University Long Beach, but dropped out to pursue his entertainment career. He gained notoriety as an uncredited assistant editor on the classic western Wagon Train (1957). Among his early directing efforts were Battle Squad (1961), which combined World War II footage with footage of an airplane on the ground that he makes you believe is moving. He also directed Escape to Nowhere (1961), which featured children as World War Two soldiers, including his sister Anne Spielberg, and The Last Gun (1959), a western. All of these were short films. The next couple of years, Spielberg directed a couple of movies that would portend his future career in movies. In 1964, he directed Firelight (1964), a movie about aliens invading a small town. In 1967, he directed Slipstream (1967), which was unfinished. However, in 1968, he directed Amblin' (1968), which featured the desert prominently, and not the first of his movies in which the desert would feature so prominently. Amblin' also became the name of his production company, which turned out such classics as E.T. the Extra-Terrestrial (1982). Spielberg had a unique and classic early directing project, Duel (1971), with Dennis Weaver. In the early 1970s, Spielberg was working on TV, directing among others such series as Rod Serling's Night Gallery (1969), Marcus Welby, M.D. (1969) and Columbo: Murder by the Book (1971). All of his work in television and short films, as well as his directing projects, were just a hint of the wellspring of talent that would dazzle audiences all over the world.

Spielberg's first major directorial effort was The Sugarland Express (1974), with Goldie Hawn, a film that marked him as a rising star. It was his next effort, however, that made him an international superstar among directors: Jaws (1975). This classic shark attack tale started the tradition of the summer blockbuster or, at least, he was credited with starting the tradition. His next film was the classic Close Encounters of the Third Kind (1977), a unique and original UFO story that remains a classic. In 1978, Spielberg produced his first film, the forgettable I Wanna Hold Your Hand (1978), and followed that effort with Used Cars (1980), a critically acclaimed, but mostly forgotten, Kurt Russell\\Jack Warden comedy about devious used-car dealers. Spielberg hit gold yet one more time with Raiders of the Lost Ark (1981), with Harrison Ford taking the part of Indiana Jones. Spielberg produced and directed two films in 1982. The first was Poltergeist (1982), but the highest-grossing movie of all time up to that point was the alien story E.T. the Extra-Terrestrial (1982). Spielberg also helped pioneer the practice of product placement. The concept, while not uncommon, was still relatively low-key when Spielberg raised the practice to almost an art form with his famous (or infamous) placement of Reece's Pieces in "E.T." Spielberg was also one of the pioneers of the big-grossing special-effects movies, like "E.T." and "Close Encounters", where a very strong emphasis on special effects was placed for the first time on such a huge scale. In 1984, Spielberg followed up "Raiders" with Indiana Jones and the Temple of Doom (1984), which was a commercial success but did not receive the critical acclaim of its predecessor. As a producer, Spielberg took on many projects in the 1980s, such as The Goonies (1985), and was the brains behind the little monsters in Gremlins (1984). He also produced the cartoon An American Tail (1986), a quaint little animated classic. His biggest effort as producer in 1985, however, was the blockbuster Back to the Future (1985), which made Michael J. Fox an instant superstar. As director, Spielberg took on the book The Color Purple (1985), with Whoopi Goldberg and Oprah Winfrey, with great success. In the latter half of the 1980s, he also directed Empire of the Sun (1987), a mixed success for the occasionally erratic Spielberg. Success would not escape him for long, though.

The late 1980s found Spielberg's projects at the center of pop-culture yet again. In 1988, he produced the landmark animation/live-action film Who Framed Roger Rabbit (1988). The next year proved to be another big one for Spielberg, as he produced and directed Always (1989) as well as Indiana Jones and the Last Crusade (1989), and Back to the Future Part II (1989). All three of the films were box-office and critical successes. Also, in 1989, he produced the little known comedy-drama Dad (1989), with Jack Lemmon and Ted Danson, which got mostly mixed results. Spielberg has also had an affinity for animation and has been a strong voice in animation in the 1990s. Aside from producing the landmark "Who Framed Roger Rabbit", he produced the animated series Tiny Toon Adventures (1990), Animaniacs (1993), Pinky and the Brain (1995), Freakazoid! (1995), Pinky, Elmyra & the Brain (1998), Family Dog (1993) and Toonsylvania (1998). Spielberg also produced other cartoons such as The Land Before Time (1988), We're Back! A Dinosaur's Story (1993), Casper (1995) (the live action version) as well as the live-action version of The Flintstones (1994), where he was credited as "Steven Spielrock". Spielberg also produced many Roger Rabbit short cartoons, and many Pinky and the Brain, Animaniacs and Tiny Toons specials. Spielberg was very active in the early 1990s, as he directed Hook (1991) and produced such films as the cute fantasy Joe Versus the Volcano (1990) and An American Tail: Fievel Goes West (1991). He also produced the unusual comedy thriller Arachnophobia (1990), Back to the Future Part III (1990) and Gremlins 2: The New Batch (1990). While these movies were big successes in their own right, they did not quite bring in the kind of box office or critical acclaim as previous efforts. In 1993, Spielberg directed Jurassic Park (1993), which for a short time held the record as the highest grossing movie of all time, but did not have the universal appeal of his previous efforts. Big box-office spectacles were not his only concern, though. He produced and directed Schindler's List (1993), a stirring film about the Holocaust. He won best director at the Oscars, and also got Best Picture. In the mid-90s, he helped found the production company DreamWorks, which was responsible for many box-office successes.

As a producer, he was very active in the late 90s, responsible for such films as The Mask of Zorro (1998), Men in Black (1997) and Deep Impact (1998). However, it was on the directing front that Spielberg was in top form. He directed and produced the epic Amistad (1997), a spectacular film that was shorted at the Oscars and in release due to the fact that its release date was moved around so much in late 1997. The next year, however, produced what many believe was one of the best films of his career: Saving Private Ryan (1998), a film about World War Two that is spectacular in almost every respect. It was stiffed at the Oscars, losing best picture to Shakespeare in Love (1998).

Spielberg produced a series of films, including Evolution (2001), The Haunting (1999) and Shrek (2001). he also produced two sequels to Jurassic Park (1993), which were financially but not particularly critical successes. In 2001, he produced a mini-series about World War Two that definitely *was* a financial and critical success: Band of Brothers (2001), a tale of an infantry company from its parachuting into France during the invasion to the Battle of the Bulge. Also in that year, Spielberg was back in the director's chair for A.I. Artificial Intelligence (2001), a movie with a message and a huge budget. It did reasonably at the box office and garnered varied reviews from critics.

Spielberg has been extremely active in films there are many other things he has done as well. He produced the short-lived TV series SeaQuest 2032 (1993), an anthology series entitled Amazing Stories (1985), created the video-game series "Medal of Honor" set during World War Two, and was a starting producer of ER (1994). Spielberg, if you haven't noticed, has a great interest in World War Two. He and Tom Hanks collaborated on Shooting War (2000), a documentary about World War II combat photographers, and he produced a documentary about the Holocaust called Eyes of the Holocaust (2000). With all of this to Spielberg's credit, it's no wonder that he's looked at as one of the greatest ever figures in entertainment.

Uses powerful flashlights in dark scenes (Jurassic Park (1993); The Lost World: Jurassic Park (1997) and E.T. the Extra-Terrestrial (1982)). The outline of the beam is often made visible through dust, mist, or fog.
Frequently uses music by John Williams.
Often shows shooting stars (Jaws (1975)).
Onscreen performers staring, usually at something off-camera.
He often uses images of the sun (Raiders of the Lost Ark (1981), The Color Purple (1985), Empire of the Sun (1987), Saving Private Ryan (1998)).
His films often show children in some sort of danger.
Consistent references to World War II.
Frequent references to Disney films, music, or theme parks
Frequently uses a piano as an element in key scenes (Schindler's List (1993), Saving Private Ryan (1998), Minority Report (2002)).
Important images, or characters, are often seen through the rear-view mirror of a car (Duel (1971), E.T. the Extra-Terrestrial (1982), Jurassic Park (1993), Schindler's List (1993), A.I. Artificial Intelligence (2001)).
Frequently casts Tom Hanks, Richard Dreyfuss, Harrison Ford, Frank Welker and Tom Cruise.
Protagonists in his films often come from families with divorced parents, with fathers portrayed as reluctant, absent or irresponsible, most notably in _et: the Extra-Terrestrial_ (Elliot's mother is divorced and father is absent) and Catch Me If You Can (2002) (Frank Abagnale's mother and father split early in the film). This reflects Spielberg's own experience as a youth with his parents breaking up.
A common theme in many of his films is ordinary people who discover something extraordinary - people, places, artifacts, creatures, etc. (Raiders of the Lost Ark (1981), E.T. the Extra-Terrestrial (1982)).
Since Raiders of the Lost Ark (1981), all of his movies have featured visual effects (even those that were undetected) by Industrial Light & Magic (ILM), the F/X house created by his friend George Lucas. The only exception has been The Terminal (2004), which had F/X work by Digital Imageworks.
Is credited for starting the summer blockbuster tradition with 1975's first $100 million megahit, Jaws (1975).
His films are almost always edited by Michael Kahn.
Known on-set for being able to work and come up with ideas very quickly (the best example of this would be the filming of "Saving Private Ryan", where Spielberg came up with angles and shot ideas on the spot, due to the fact that the film was largely un-storyboarded). Perhaps this is a habit he picked up after the filming of "Jaws", which was, very famously, a torturously slow shoot due to technical problems.
Ardent champion of the "cutting-in-camera" philosophy
Frequently uses (and helped re-popularize) the "dolly zoom" in-camera effect used to signify/evoke an impactful moment or realization, famously employed in "Jaws" upon Chief Brody witnessing the shark attack from his beach chair. 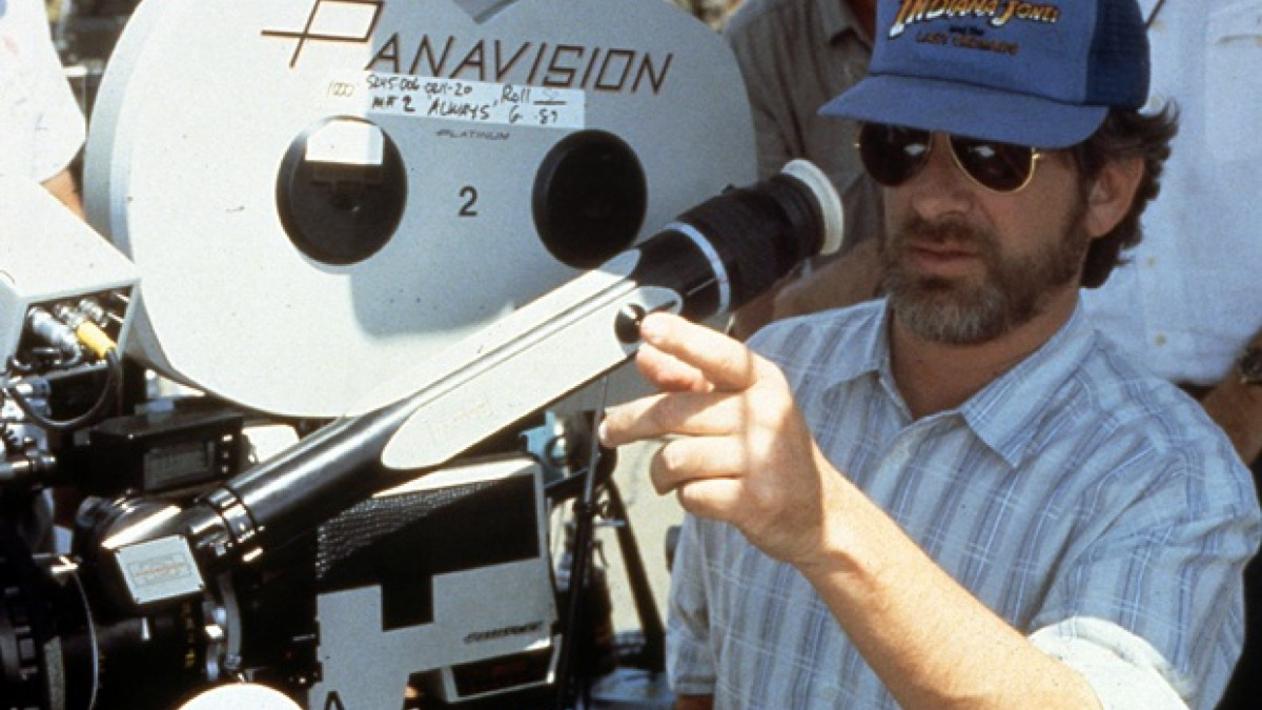