Terry Gilliam was born in Minnesota near Medicine Lake. When he was 12 his family moved to Los Angeles where he became a fan of Mad magazine. In his early 20's he was often stopped by the police who often suspected him of being a drug addict and Gilliam had to explain that he worked in advertising. Gilliam said these experiences made him understand how it was like to be Black or Mexican and gave him sympathy for the poor. In the political turmoil in the 60's, Gilliam feared he might develop into a terrorist and decided to leave the USA. After moving to England he landed a job on the children's television show Do Not Adjust Your Set as an animator. There he would meet his future collaborators in Monty Python: Terry Jones, Eric Idle and Michael Palin. In 2006 he renounced his American citizenship.

Was first known for the bizarre animation sequences in Monty Python's Flying Circus (1969) using cutout pictures and photographs.
Heroes in his films often dream of a woman who they have not yet met, but will meet during the course of the film. In the dream, the woman's face is obscured.
Often features people/animals bursting through walls or ceilings
Often begins and ends his films with the same shot
Heavy use of wide angle lenses
[Television monitors] They were in Brazil (1985), Twelve Monkeys (1995), The Fisher King (1991), Fear and Loathing in Las Vegas (1998) and Time Bandits (1981).
Dutch tilt shots
Frequently casts Jonathan Pryce, Katherine Helmond, Michael Palin, John Cleese, Eric Idle, Robin Williams, Johnny Depp, Jeff Bridges, Christopher Plummer, Peter Stormare and Tom Waits.


Founding editor of and principal contributor to campus humor magazine, "Fang", at Occidental College in Los Angeles, CA in the early 1960s.
He started to direct "The Man Who Killed Don Quixote" in 2001 (in Spain) with Johnny Depp, Vanessa Paradis and Jean Rochefort but the shooting was unfortunately stopped a couple of days after it started because of numerous factors including storms, lack of financing, and Jean Rochefort's health problems (he couldn't ride a horse any more). There is a documentary based on the struggle in production entitled "lost in la mancha".
During the filming of Brazil (1985) he became so stressed that he temporarily lost the use of his legs, which only returned to normal several weeks later.
Has taken British citizenship.
Father of Amy Gilliam (aka Amy Rainbow Gilliam), Holly Gilliam (aka Holly DuBois Gilliam) and Harry Gilliam (aka Harry Thunder Gilliam).
J.K. Rowling, creator of the "Harry Potter" book series, originally wanted Gilliam to direct Harry Potter and the Sorcerer's Stone (2001), but Warner Brothers studios wanted a more family friendly film and eventually settled for Chris Columbus.
Turned down the opportunity to direct Who Framed Roger Rabbit (1988), Enemy Mine (1985), and Forrest Gump (1994) and Alien: Resurrection (1997).
Has been off and on to write and direct a movie adaptation of Alan Moore and Dave Gibbons's graphic novel "Watchmen." Gilliam has said he attempted to write an accurate screenplay but it would be unfilmable, but he would consider directing it if it were made into 10 or 12-part cable television series.
Was slated to direct an adaptation of the novel "Good Omens" by Neil Gaiman and Terry Pratchett. The project languished in development for three years before finally being abandoned.
Directed a series of TV ads for Nike in 2001. They were part of The Scorpion Knockout Campaign, which featured some of the best soccer players on the globe. That campaign went to win a Cannes award in 2002, in the category of Best TV Campaign.
Also turned down directing Braveheart (1995), when briefly solicited by Mel Gibson to direct an abandoned film version of Charles Dickens's "A Tale of Two Cities".
Member of the 'Official Competition' jury at the 54th Cannes International Film Festival in 2001.
Raised in Los Angeles.
He did not originally intend to cast Sean Connery as King Agamemnon in Time Bandits (1981), he merely wrote in the screenplay that when Agamemnon took off his helmet that he looked "exactly like Sean Connery." To Gilliam's surprise, the script found its way into Connery's hands and Connery subsequently expressed interest in doing the film.
Born in Minnesota, he is the only non-British member of the Monty Python comedy troupe
The Fisher King (1991) was the first film that he directed in which he was not involved in writing the screenplay.
He and John Cleese are the only members of 'Monty Python' to be nominated for Oscars. Coincidentally, they were both for Best Original Screenplay, Gilliam for Brazil (1985) and Cleese for A Fish Called Wanda (1988). Both screenplays did not win their Oscars, and both films featured Michael Palin.
Gave up his US citizenship in January 2006. [source: Haaretz interview, Feb. 2006].
Was offered the chance to direct Troy (2004). He stopped reading the script 5 pages in and declined the offer.
Is a fan of science fiction author Philip K. Dick.
Member of the comedy group "Monty Python" along with John Cleese, Michael Palin, Terry Jones, Eric Idle and Graham Chapman. Gilliam also created the animations.
Four of his films are in the Criterion Collection - Fear and Loathing in Las Vegas (1998), The Fisher King (1991), Brazil (1985), and Time Bandits (1981).
As of 2010, has directed three actors in Oscar-nominated roles; Brad Pitt (Twelve Monkeys (1995)), Robin Williams, and Mercedes Ruehl (The Fisher King (1991)). Ruehl won her Oscar for Best Supporting Actress.
As a result of renouncing his American citizenship, he is only permitted to spend 29 days a year in the United States, considerably less than the average U.K. Citizen.
Was J.K. Rowling's first choice to direct the "Harry Potter" films.
Contributed animations and sketches to Do Not Adjust Your Set (1967); he did one of David Jason's head on a pig's body.
According to his memoir, Terry Jones actually wanted Gilliam to co-direct Life of Brian (1979) but he wasn't interested after facing some tension with the Monty Python group (apparently they wouldn't take his directions as seriously as actors he worked with after, and said he got a different experience on Jabberwocky (1977)), so he was brought on as production designer instead.
He was approached soon after the release of Monty Python and the Holy Grail (1975) to make a movie involving Beatles songs called 'All This and World War 3', but he turned it down and pitched Jabberwocky (1977) instead.
Retrospective at the 11th New Horizons Film Festival (2011). 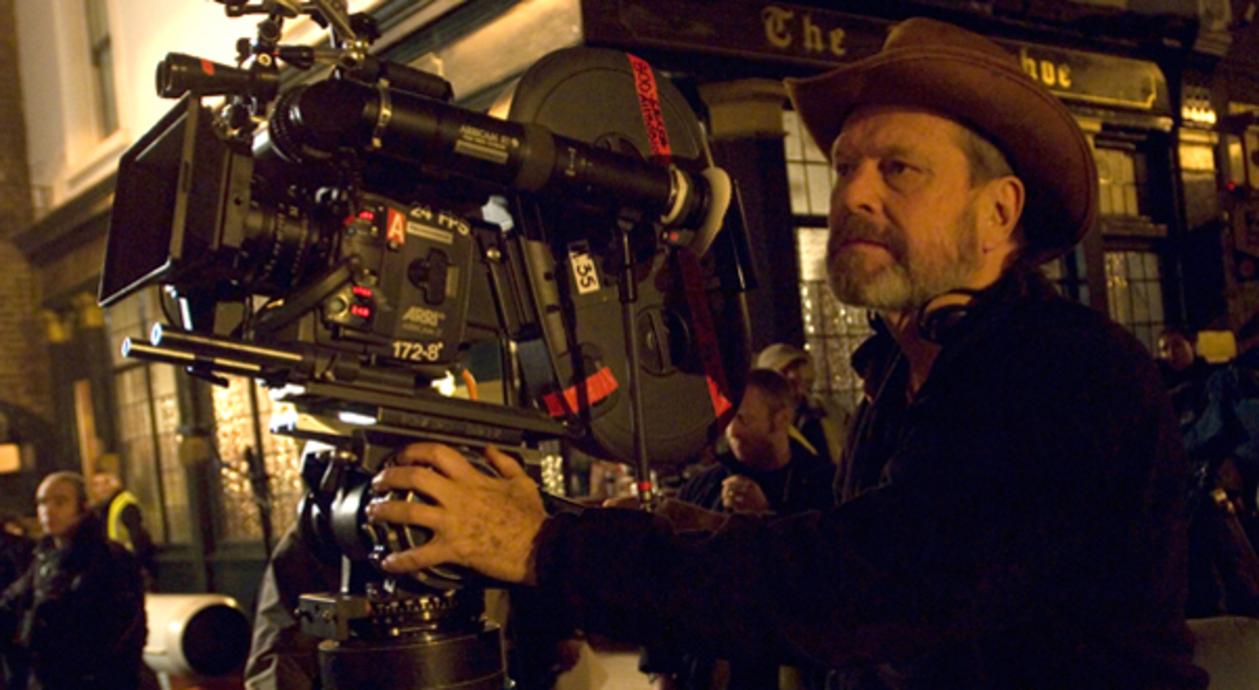